Greg Myers
Tulsa, Oklahoma, United States
I draw and then burn what I draw using pyrography. My favorite subjects are wildlife, especially owls and fawns. I always have a sketch pad with me and will draw even while I am waiting in a doctor's office. I do like to fish. I usually fish a small city lake but may go fishing at Dripping Springs, McGee Creek or Lake Fork in Texas.

A lot of new things for Oklahoma Bass Fishing before the start of 2008...

I have been doing a lot of work on the Oklahoma Bass Fishing web site. I have created a new front page so that it is easier to get to the main web site pages. Hopefully, these pages will make it a lot easier to navigate the site. There is a link on the front page to take you to the old site or "The Main Site".

I upgraded the forums and they seem so much easier to use and have a lot more bells and whistles. I am looking at adding some new "skins" or different looks for the forums. You will have the option of picking the look you want for the forums.

I have been fishing on several days but didn't write about them. I have just been too busy with the changes to the Oklahoma Bass Fishing web site and I have started the TrophyBassInformation.com web site that I hope to have finished by the end of February 2008 if I am lucky.

I got out fishing today, December 27, 2007, and it drizzled all day long. I made use of the day by gridding part of a lake for several hours. I never knew there was so much structure on this lake. I found several big balls of shad and schools of fish around the shad. I marked 25 GPS waypoints that I will go back and check with the underwater camera to see just what exactly is down there at some of these spots.

I was the only one on the lake today and did pretty well except my feet did get cold. I had on a blizzard suit so my main body stayed pretty warm.
Posted by Greg Myers at 12:20 AM 3 comments:

I a new front page to Oklahoma Bass Fishing. Hopefully, it will be easier to navigate the web site now.

I still have to tweak the pages for the next week or so.

If you have any questions, problems or suggestions, please post them in the forums so that I can address them.

I will be working on Trophy Bass Information as soon as I get the new pages for Oklahoma Bass Fishing finished.

TrophyBassInformation.com is under construction at the present time. Dec. 12, 2007...
Posted by Greg Myers at 10:30 PM No comments:

The water clarity was about 3' where we fished. The surface water temperature was 73 - 74 degrees.

We were mainly fishing creek channel bends but one area that we did fish was a point that had a creek channel that swung in close to it.

The pattern for the day was a ¼ ounce shaky head set up with a Strike King 7" finesse worm. The color was green pumpkin.

The fish that we caught were right where the bank dropped off into the creek channels in about 18' of water. The fish were fairly agressive, eatting the shaky worm almost completely.

If you are not familiar with the shaky head rig, you need to get "The Bass Pros Season 1" at Bass Pro. The first of the eleven chapters has a segment where KVD tells you about the shaky head rig...
Posted by Greg Myers at 10:07 PM No comments:

I was able to get out and do some fishing yesterday. I caught several schooling fish and then found a school of fish at one of my regular fishing spots. I anchored out from various angles and caught fish from each angle. Once they quit biting from fishing one angle I would just reposition the boat and cast from a different angle.

I used a shaky head worm, wacky worm, 6" swim bait, 10" worm, creature baits, flukes, etc. This is the first day in some time that I have caught over 15 fish in a day and I put out at daylight and quit about 10:30am when I had a phone call that I needed to go home to get the information.

Reminder to myself, always turn the cell phone off when you are going fishing...
Posted by Greg Myers at 1:28 PM No comments:

Long_Mike and I went to Skiatook on Sunday, September 16, 2007. This trip was more towards getting his boat to running better by running some StarTron through the fuel system and to decide just how far his trailer needed to be in the water for him to load the boat the easiest way.

I did take 2 rods, and some tackle with us to fish a little while the StarTron was soaking into the gum and varnish in his carbs and fuel system. The last trip we went on, his boat would not idle at all. When we loaded his boat on Sunday, the boat was idleling just fine.

We did decide on the proper depth that his trailer needed to be at for him to load his boat the easiest using the bunk boards to control how far left and right the boat went onto the trailer.

We are going to go out again after the StarTron has soaked his carbs and fuel system to see if the motor doesn't run even better.

We discovered that his tach was off. I had told him that it sure didn't sound like the motor was running at 1100 rpm when the tach was showing 1100 rpm. Sure enough when I tapped on the tach the rpms went down. So, when we take the boat out again we will set the idle by sound unless he gets a new tach.

I believe there are a few things going on with his motor. I think that they floats and needles are gummed up and not pivoting correctly. I am hoping that this week the StarTron will dissolve a lot of this gum and varnish out of his floats and around his needles. Making it easier for the fuel to flow through his carbs. I am also thinking that the motor is trying to idle at around 500 rpms and not turning enough rpms for the engine to idle.

The next time we go out, I will reset his idle to where the boat will idle and him not have to bump the throttle to keep the motor idleing.

While at Skiatook, the water was pretty dirty. The visibility was about a foot or just a little more than a foot. This was my first time on Skiatook to actually fish so I was not prepared for the water to be that stained. I was thinking that Skiatook was a lot clearer lake than that. We did have quite a bit of rain that might have muddied up the water.

While on Skiatook I noticed just how high the drift wood was. Skiatook had been way above normal pool from all the rain that we had this year.
Posted by Greg Myers at 4:46 PM No comments:

Now that it has started cooling down the fishing should start picking up. Just to think a couple of weeks ago it was in the triple digits and now in the morning you need a jacket.

The surface water temperature should have cooled down quite bit now. I will know the next time I get to go fishing.
Posted by Greg Myers at 5:39 PM No comments:

I added a Product Test Report on Papa's Buzzbaits. I have been using this unique design of buzzbait for over a month now and am very pleased with it's capability of catching Bass. This buzzbait is not made in the regular "safety pin" shape. It has a shaft that holds the line tie, the blade, the lead head and hook with just 2 slight bends between the blade and the lead head. 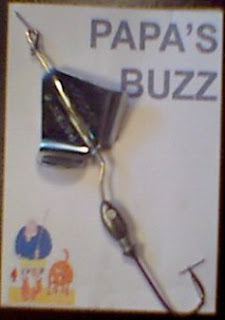 You can find the full review on the front page of Oklahoma Bass Fishing or in the Product Test Report forum.